Success4Kids (S4K) is a 501(c)(3) nonprofit organization that conducts youth outreach on the high school campuses in Phoenix, Arizona. S4K's “At- Risk Youth After-School Activity Program” provides youth between the ages of 14 and 19 with the opportunity to play the sport of handball in a safe, structured environment with certified instructors.  Upon entering the program, youth are matched up with mentors who will provide guidance and support, both on the court and in the classroom.  Through this after-school program, Success4Kids helps Phoenix youth build their self esteem and guides them toward making healthy life choices.

​In order to participate in the S4K program, youth are required to follow set guidelines:

• Must be passing all classes
• Must uphold Success4Kids standards
• Must attend handball practices and community events in order to be considered for travel team.

The success of the S4K program is made apparent by the continued support and participation from its alumni participants.  Many alumni return to the program as volunteer coaches and serve as inspirational role models to high school participants. S4K alumni are also valuable resources to graduating S4K participants who are looking for higher education and jobs. 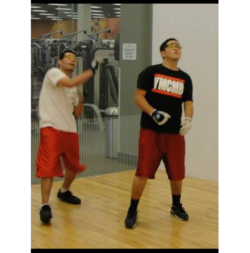 Success4Kids was formed in 2001, by a group of Phoenix business people who recognized a need for disadvantaged youth to participate in a physical, goal-oriented activity after school. Few of these youth participated in inter-scholastic sports and were at risk to make poor choices with their free time. School organized sports programs are competitive and expensive; by their very nature, they exclude the less gifted athletes. That population is the one Success4Kids targets: the ones left behind. Today, Success4Kids’ after school handball program has grown so much in popularity that students are now choosing the S4K program over other after-school sports such as football.​

Comments from youth served by our program speak volumes about its accomplishments:

​ARMANDO participated in the program for four years while in high school. "I love the competition of the handball.  If it weren't for Success4kids I'd be out on the street. Some of my friends are in jail.  Two are dead."

RICHARD was involved with Success4kids for two years.  "I was planning on joining the Marine Corps, but not for the right reasons.  I did not feel worthwhile and I felt I had to keep proving myself.  Thanks to Success4kids, I graduated from high school and now work as a detention officer.  I still play handball every weekend. "

STEVE after graduating high school won a national high school championship, for his age group.  "What I like best about handball is that you have to use your mind.  I am at college now, in large part because of Success4kids.